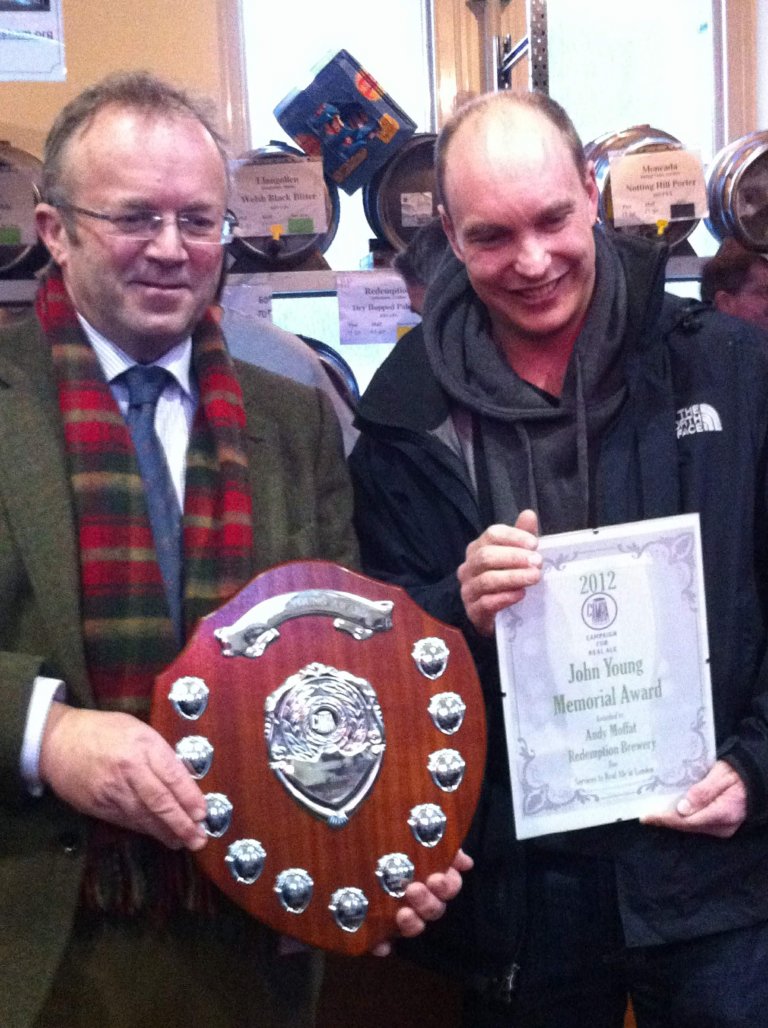 This year, London CAMRA's John Young Memorial Award goes to a man who started a brewery in an area not renown for its real ale.

Beating many other entries, the 2012 Award is being given to Andy Moffat, the owner of Redemption Brewery in Tottenham, for his commitment to brewing good beer and supporting everyone involved with promoting real ale.

John Young, the chairman of Young's Brewery who died in 2006, was well regarded as an advocate of good beer and pubs. He famously banned keg beers from Young's pubs long before CAMRA came on to the scene. To celebrate his memory, the London branches of CAMRA make an annual award to acknowledge publicly an individual or organisation that they believe has done the most for real ale and/or pubs within the Greater London area.

Not since the early 1930s has there been any brewing in Tottenham but Andy, a former merchant banker, changed all that by starting the Redemption Brewery on a small trading estate in N17 in 2010. Since then the brewery has gone from strength to strength and now the brewery has more than one employee!

Andy is known for encouraging pubs who wouldn't usually stock real ale to try it and for supporting other brewers in London. He is an active member of the London Brewers Alliance, an organisation representing brewers in London with the aim of promoting great London beer. He has also wowed London drinkers with his creativity. One of his beers, Trinity, is only 3% ABV (alcohol by volume) and a great example of beers not needing to be of a high ABV to be full of flavour.

John Cryne, CAMRA London's Regional Director said 'The Award to Andy Moffat recognises the important role he has played in the resurgence of brewing in the Capital. Like in so many other food and drink areas, this resurgence is a result of consumers seeking out local, good quality produce. This is something that CAMRA has been promoting through its LocAle scheme.'

The Award was presented at the Pig's Ear Beer Festival, The Round Chapel, Powercroft Road, E5 0PU on Tuesday 4th December by no other than the nephew of John Young, Torquil Sligo-Young. The heritage of London brewing seems set to continue.